Vertical indoor farming is growing up and as it does some companies are emerging as major players. As of 2021,  over 2,000 vertical farms were in operation in the U.S. While more than 60 percent of these are owned by small growers, the market seems ready to invest in some winners. The stakes are high – the vertical farming market is estimated to be worth about $4 billion in 2021 dollars and one report is calling for it to explode to nearly $20 billion by 2028.

In January of 2020, Walmart made a significant investment in Plenty Unlimited, a California based startup that grows produce indoors. Backed by one of the largest U.S. patent portfolios in the industry, Plenty’s proprietary technology makes it one of the more promising companies operating in the growing space. Walmart spent 4 years surveying the industry for a partner and so their choice to invest in Plenty is telling.

While the exact dollar amount Walmart invested in was not disclosed, it’s enough to have earned the retailing giant a seat on Plenty’s board of directors. Plenty will have access to Walmart’s distribution and marketing expertise. More importantly, it will sell product to Walmart’s customers as the retailer will source produce for all its California stores from Plenty’s Compton, CA farm beginning later in 2022. Walmart is the first large U.S. retailer to significantly invest in vertical farming. 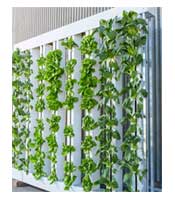 The benefits of vertical ag are many and seem clear. They include reduced water and chemical usage, improved yield, and healthier crops. Since they do not need to factor in weather or sunlight, vertical farms can reduce growing time drastically. Also, considering that they can operate 365 days a year, some operators claim to be able to boost the annual yield by about 700 percent. While labor costs are currently high, it’s expected that there will eventually be labor cost savings from improvements in automation and technology.

Space optimization is also a benefit; a benefit that attracts a “green” crowd as well as those investors and companies committed to sustainability which is, of course, an industry buzzword that is in now in favor.  A well designed and properly managed indoor farm requires one percent of the land used by an outdoor farm but it can produce anywhere from 150 to 350 times more food per hectare. Experts say that this dramatic reduction in the use of land translates to a positive effect on climate change.

Despite the obvious benefits, there are also a number of challenges the industry faces. For starters, only a limited number of crops can be grown economically indoors. Leafy greens and herbs remain the primary crop due to their rapid growth cycle, high cost, and short shelf life. These crops have a low ‘caloric density’ meaning that such farms can only go so far in meeting the caloric and nutritional needs of the average person. Despite the hoopla, vertical ag’s success won’t threaten traditional agriculture anytime soon.

Growing any crop indoors requires a lot of energy. Lighting is the most critical component of a vertical farm and sophisticated HVAC systems are needed. Also, a successful operation demands sophisticated skills and technologies that are still emerging. In short, there’s a host of technical hurdles that even the best vertical farming companies face going forward.

In addition to the technical challenges there are also looming business concerns. Succeeding at scale is extremely capital-intensive as it can cost up to $15 million to construct a modern vertical farm. However, as evidenced by Walmart’s investment, there seems to be an “if we build it they will come” movement betting that money will flow to the winners. But like anything else that is “emerging” the road to success will be littered with some losers.

We’ve gathered a list of some of the major players in the indoor vertical farming biz who may turn out to be among its winners: